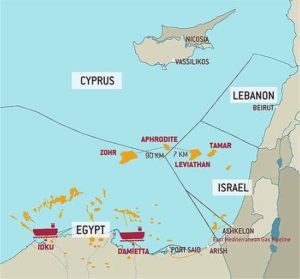 Frequently we hear the aspiration of transforming Cyprus into a regional energy hub. Turkey flirts more prominently with the idea while Egypt more recently voiced serious interest. Considering the economic importance of energy hubs not only for the host country but to the world’s economy it is instructive to explore what an energy hub is and what does it take to establish one. Starting, energy hubs are divided into oil hubs or natural gas hubs. They are important for a host of reasons, namely, the financial benefits from trading activities, employment opportunities for maintaining storage and transportation facilities, geopolitical leverage, access to petroleum supplies and value adding activities such as refining crude oil or raw materials for petrochemicals and the technical know-how possessed by oil companies and contractors.

Energy hubs are divided into physical locations and virtual hubs. For natural gas, major energy hubs include Henry Hub in the US, Zeebrugge Hub in Belgium, Baumgarten Hub in Austria, UK’s National Balancing Point (NBP) and Qatar’s Ras Laffan LNG terminal. Major oil hubs comprise Cushing Oklahoma in the US, Rotterdam in Netherlands, Ras Tanura terminal in Saudi Arabia, and Russia’s De-Kastri oil terminal in the Far East. Irrespective of whether oil or gas is the major commodity, physical energy hubs share some common traits. Most importantly, energy prices or a benchmark is very often determined at a hub. For example, Henry hub and NBP define natural gas futures in the US and the UK, respectively. To facilitate trading, an energy hub features an extensive pipeline network with interconnection terminals linking producers or importers to buyers and consumers.

Energy transactions between producers and buyers are supported by a strong banking sector which ensures that agreements are honoured while offering enough liquidity where deemed necessary. Another essential element of energy hubs is the market of energy futures. Energy futures refer to forward contracts pertaining to the acquisition and sale of energy assets be they oil or natural gas. Understandably, all of these business dealings warrant a strong legal system for resolving disputes.

Sufficient storage for fuels such as crude oil or refined products constitutes another vital ingredient of energy hubs. Given that oil is in liquid form its storage is not an issue as it can be accommodated in unpressurised tanks at a low cost. In contrast, storage space for natural gas comes at a premium when it comes to establishing a natural gas hub. Ideally, natural gas due to its low energy density is stored in depleted natural gas reservoirs. The difficult part is for these natural storage facilities to be located at a junction tying sellers to energy consumers with considerable volumes of energy products moving in different directions. Last but not least, transporting either oil or gas calls for a developed road or rail network and enough space to house compression or pumping stations dedicated to moving the fuels.

A Reality Check for Cyprus as an Energy Hub
Having outlined some of the attributes shared by some of the world’s energy hubs can Cyprus assume such a role in the Eastern Mediterranean? Due to its proximity to the Suez Canal and the traffic of oil from the Black Sea to Asia, Cyprus has garnered the attention of Vitol Group which built the VTT Vasiliko oil depot with storage capacity of 544,000 cubic meters in 2014. For the same reason in the waters of the Eastern Med substantial volumes of oil are each year transferred from one ship to another in the open sea.

From the legal system standpoint English law practised in Cyprus constitutes an advantage. Likewise the developed banking sector with sufficient liquidity together with the service sector can catalyse progress.

Yet one of the impediments remains the lack of substantial local demand for either crude oil or refined products. It could be that Cyprus will export most of these fuels but it lacks the refining capacity. Likewise, Cyprus does not offer adequate storage capacity for liquid fuels so as to make it an important regional energy focal point. Ironically, Cyprus does not yet possess enough capacity to house all of its strategic fuel reserves on the island. This gap will be presumably be met by the completion of the Vasilikos Energy Center which will house the storage facilities of energy companies including the EAC and the Vasilikos cement plant.

It, therefore, becomes apparent that Cyprus has to leverage on its strategic geographical location. Without substantial natural gas supplies yet, the island cannot act as a transit point between producers and consumers. Apparently, any future planning for converting the island into an energy hub will have to revolve around liquid fuels. As a starting point decision-makers could consider rendering prevailing legislation business friendly for major commodity traders to set-up depot and other facilities in Cyprus. In a highly competitive environment of low oil prices wishful thinking is simply not enough.

You may also find interesting:

• Maximising the Benefits From the Third Licensing Round

• The Geology of Cyprus